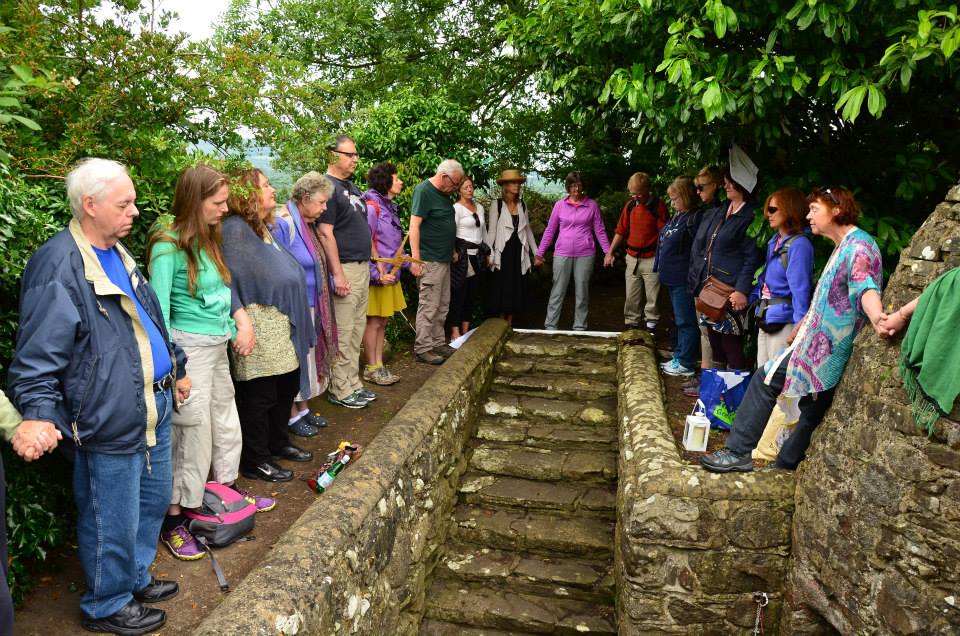 Faughart, near Dundalk Co Louth, is an ancient place filled with a history that is both gentle and fierce.  It is a place associated with battles, boundaries and travel.  The Sli Midhluachra, one of the 5 ancient roads of Ireland, runs through the hill of Faughart on its way from Tara to Armagh and to the north coast of Ireland, making it a strategically important place.

However, Faughart is also a place of deep peace, tranquillity, beauty and healing, being associated from ancient times with Brigid, pre- Christian Goddess and Christian Saint.  Brigid occupies a central role within the Celtic Spiritual tradition, holding the energy of the Divine Feminine, a central pillar of that tradition. The mystical woman St. Moneena was also associated with Faughart, before she moved to the quieter place near Kileevy, Co Armagh, where she created her monastery. Over the centuries, Faughart has been a place where the polarities of inner and outer life, battles and prayers have been experienced.  For the people in Louth, Monaghan, Armagh and Down, Faughart is the place associated with Brigid, the compassionate woman who heals, advises and nurtures all who come to her in times of need.

Pat O Rourke reflects that “At St Brigid’s shrine the cheerful stream weaves through the re-awakened mystical landscape, just as the reeds weave together to make the Brigid’s crosses.  The stream emerges out of mother earth and traces through the tall trees to the fabulous healing stones below and returns to the pasture fields at Faughart “(1)

Ireland is a place with a deep and enduring spiritual heritage that has been expressed in different forms over many millennia, as it evolved from the Megalithic to the pre- Christian Celtic tradition to the Celtic Christian period… An enduring aspect of that spiritual tradition is the awareness of presence of sacred, ritual landscape throughout Ireland.

The ritual calendar of earlier times, whose celebrations were associated with the different aspects of the agricultural year, have to a large extend disappeared; Sean O Duinn reflects that “this disappearance has left technological man with his technologies but no liturgical reminder of his connection to the land or the cycle of the year” (2)  This ritual calendar was not only found in written forms, but was actually present within the  ritual landscape of the country.  A striking example of this is described by Sean O Duinn in his most recent book “In Search of the Awesome Mystery” where he elaborates on The Barony Of Duhallow which has four holy wells, each of which is connected with a particular season and celebration in the ritual Celtic calendar. Each well is visited by pilgrims at the appropriate festival associated with that particular well.  This creates an actual ritual calendar within that local landscape (3) this particular site has been extensively studied and perhaps other such sites exist.

Faughart is one of the significant places of ritual landscape in Ireland and has been alive since earliest times.  When we visit any sacred place with an open heart, it is possible for us to connect with our innate knowledge of and appreciation for the Divine Presence in that place. People are drawn to   Brigid’s shrine at Faughart throughout the year because of the deep peace they experience there.

However, at La Fheile Bhride / Imbolc hundreds of people from all walks of life come to the shrine at Faughart to honour Brigid of Faughart at her special time and to invoke her life giving energy into their lives as winter recedes and  spring, with its new possibilities, emerges. Faughart located on the north eastern side of Ireland corresponds with the location of festival of Imbolc on the wheel of the Celtic year calendar.

When we make a pilgrimage to a place in the ritual landscape at its special time, we bring together two important aspects, sacred time and sacred space, creating a heightened experience of the energy of that place. This is the magic that is experienced at Faughart at Imbolc!

What is the significance of a festival Celebrating Brigid of Faughart at Imbolc in this post modern world?

Sean O Duinn suggests that at an earlier time, the ritual re-enactments of different stages of creation (associated with the different festivals) brought people back to the matrix of power. This recharging of the world battery from primary source at sacred seasons renewed the earth and all within it, offering renewal and fresh vigour to their world (4).  I believe that this ancient ritual practise is even more relevant now than in earlier times in order to re-balance the lack of harmony in our world.

The Brigid of Faughart Festival is dedicated to offering people a pathway to re-connect with the wisdom of our ancient tradition especially, that of the Divine feminine as expressed in Brigid, pre Christian Goddess and Christian saint. The festival offers a range of events including talks, workshops, healing, a special Eucharist, pilgrimage, music, poetry and story and more!  Check it out on www.brigidoffaughart.ie